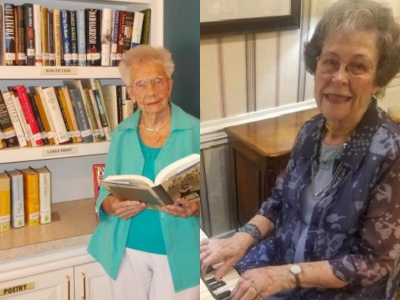 Originally named Lake Prince Center, the Suffolk continuing care retirement community was founded in 2002. It set out to accomplish what no other retirement community in the area could offer; a life plan community that allows adults to age in place at a single organization while their health needs change over time. Today, Lake Prince Woods serves 195 residents across the continuum of care. As Lake Prince Woods approaches its 19th anniversary, we would like to recognize two original residents: Betty Ann Campbell and Missie Greenwood.

Campbell has a long history in the spotlight; she has performed since she was 9-years-old and has produced, acted, taught and directed shows and skits across Virginia and North Carolina. For 12 years, she led and directed the Golden Voice Choir at Lake Prince Woods. At 88-years-old, Campbell starred in the Suffolk Center for Cultural Arts’ production of “Steel Magnolias”. Now living in an independent living apartment, Campbell reminisces on all of the productions she has led and participated over the years. “It keeps me moving and active,” shared Campbell. “There’s still lots of life left to live, and I want to use it the best way I can.”

Missie Greenwood moved to Lake Prince Woods from her retirement cottage in the Outer Banks, North Carolina. Greenwood recalls first discovering the retirement community in a presentation held by Suffolk locals and one thing stuck out to her in particular – that they would take care of her for life. “I called all my children up and let them know that I wanted to move to Lake Prince Woods,” said Greenwood. “It was entirely my decision. I wanted to make the choice so my children didn’t have to.” Born and raised in Suffolk, Greenwood was familiar with the area and its locals. “It was like coming back home,” said Greenwood. “I was able to attend the same church from years before and my sister lived near Suffolk so we became reacquainted again as well.”

Greenwood is not only an original resident of Lake Prince Woods, but one who has moved along the continuum of care it offers as well – from an independent living cottage, to an assisted living apartment, to the skilled nursing facility. When asked what she thought made the community so unique, Greenwood shared that the support and friendliness of the staff was what made Lake Prince Woods stand out, especially the executive director, Judy Raymond. “Raymond is a down to earth executive and people person. This place has flourished under her leadership. I can easily talk to her about anything; she’s one of us!”

For 19 years, Lake Prince Woods has served residents like Campbell and Greenwood; people dedicated to improving and giving back to their communities and their fellow residents, whether through music and arts, local activism, or volunteering. The community would not be what it is without the compassion and dedication of its members. The future is bright at Lake Prince Woods with an expansion of the campus, including fourteen new residential homes and a new Wellness Center. Here’s to another 19 years of Lake Prince Woods!

About United Church Homes and Services: United Church Homes and Services is a faith-based non-profit corporation, originally chartered in 1961 for the primary purpose of constructing and managing retirement communities. For the last fifty years, UCHS has developed continuing care retirement communities that offer independent and health care services and campuses for affordable housing. To learn more, visit www.uchas.org.